Microhotels: Proving how in some cases, less may in fact be more!

Here are a few industry examples of Microhotels worth remembering! 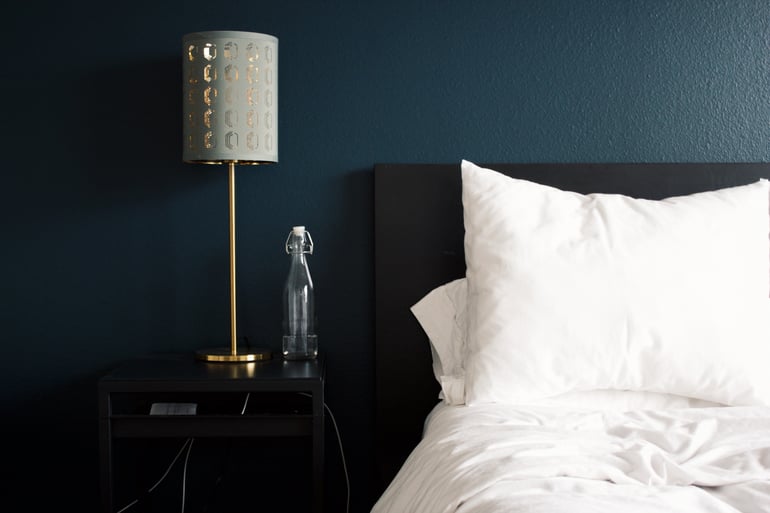 Modern hospitality and the need for differentiation

In a recent article STR Global predicted the number of hotel rooms in the world is now over eighteen million, and expected to grow to twenty million over the next ten years. Bearing these figures in mind, and recognizing the exponentiality of progressive development, the natural question of perishability arises. That is why hotels wishing to enter the already oversaturated industry must have a certain uniqueness or individuality so as to be able to stand out from the crowd. Here are a few examples of hotels that have adopted this creativity in the form of Microhotels.

Microhotels are essentially hotels that offer a room with an unusually small square footage, typically averaging at around 163 sqft. These hotels promote the idea of minimalism and pure practicality, which is a quality that has been warmly welcomed by the modern guest; especially as it appears that the recent trends in hospitality are leaning towards the complex. As you can see in the examples below, in some cases, less most definitely means more.

Situated in the expansive North Cascades National Park in Washington, The Rolling Huts are a collection of environmentally conscious semi-permanent residences that offer both a modern and private alternative to camping. Designed by Tom Kundig of Olsen Kundig Architects, these six featured huts are grouped together (each facing a different view), aiding the aesthetic as well as providing an assured privacy. Each hut includes beds for two, a fridge, a microwave and WiFi, but perhaps most unusually, they also come with a set of functioning wheels! The wheels allow for the huts to be moved from A to B with minimal effort an impact, making The Rolling Huts an environmentally friendly machine. A simple but effective take on the “glamping” trend. 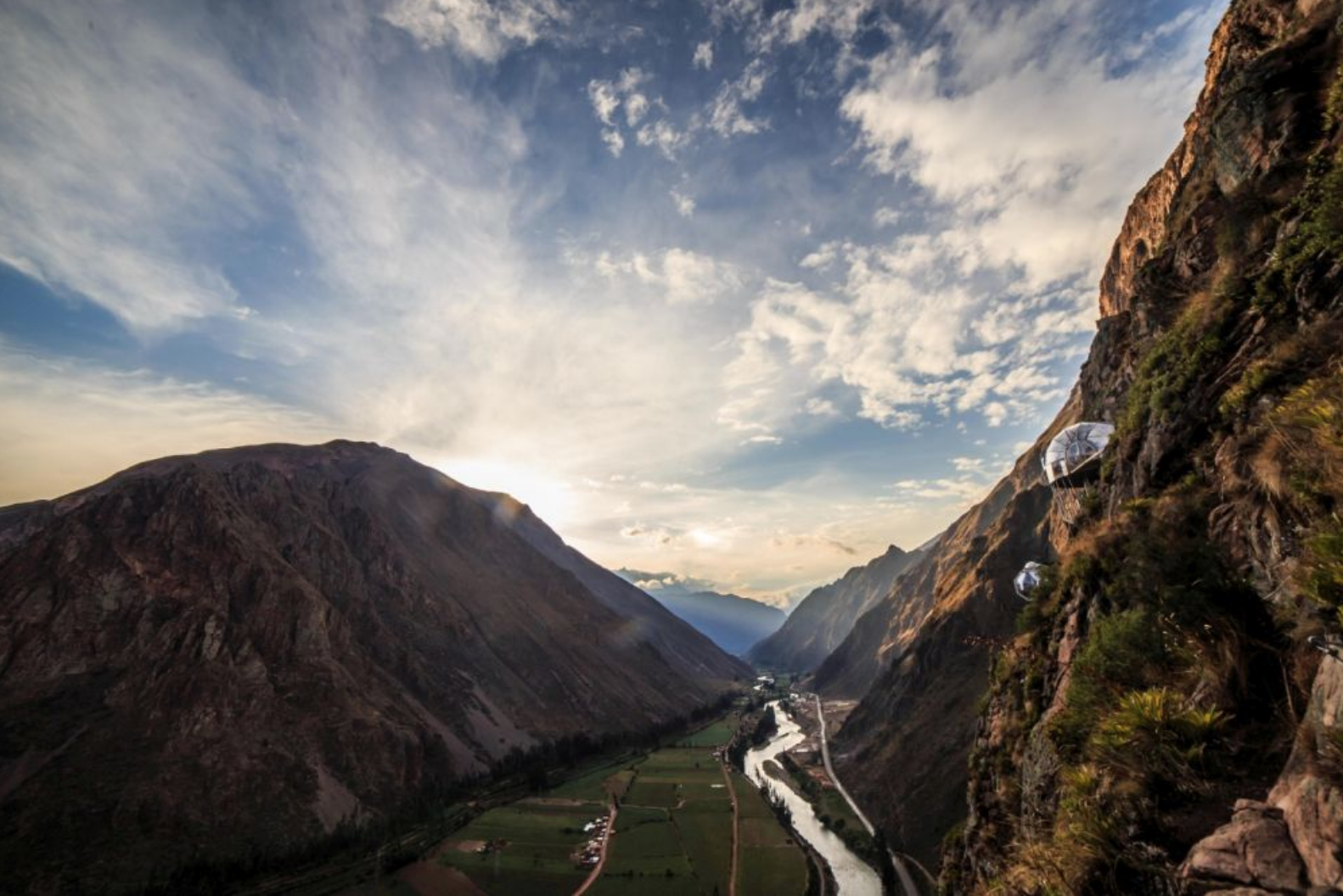 For the intrepid few that have witnessed nature’s beauty in a snapshot and wished that they could live in that moment for longer, the Skylodge concept is your answer. Marketed on adventure websites and travel news sites, the Skylodge Adventure suites does, as its name suggests, attract the more audacious traveler. Its targeted niche marketing allows the hotel to maximize its audience and reach the few that are willing to endure the jaw-dropping heights for the pleasure of staying at this unique property.

Located in Cusco Peru, the Skylodge Adventure Suites are a unique collection of transparent glass pods situated on the almost vertical face of a rock bearing mountain, overlooking the Sacred Valley. These rooms can only be reached by hiking, climbing, or zip-lining and offer an unmatched view over the glorious Peruvian Andes. Housing up to eight people, it is the perfect location for adrenaline seeking travelers and it sets the foundations for daring hospitality projects like this in the future.

Continuing on the theme of beautiful views, the Drop Box concept hotel centres around the idea of impermanence and low impact living. Marketing such a wholesome concept is a relatively simple affair, a temporary residence with a low environmental impact that can be taken anywhere. It practically sells itself. The basic ‘Box’ shaped suites designed by Barcelona based conceptual architects Studio In-Tenta, can be transported to almost any location regardless of remoteness, which allows visitors to indulge in the most untouched and unspoiled locations, whilst enjoying the convenience of luxury living.

The website boasts the verbiage “Have a morning cup of coffee in the middle of the forest, or shower with a panoramic view over a cliff” and if this doesn’t indulge the senses then nothing will. Conceptually, modular micro-architecture is fast becoming an emerging design trend and will certainly enter the hospitality spectrum very soon; this cutting-edge concept is an exciting experiment to test the creative limits of hotel design and the industry should be prepared to see many more similarly modular units in the near future. 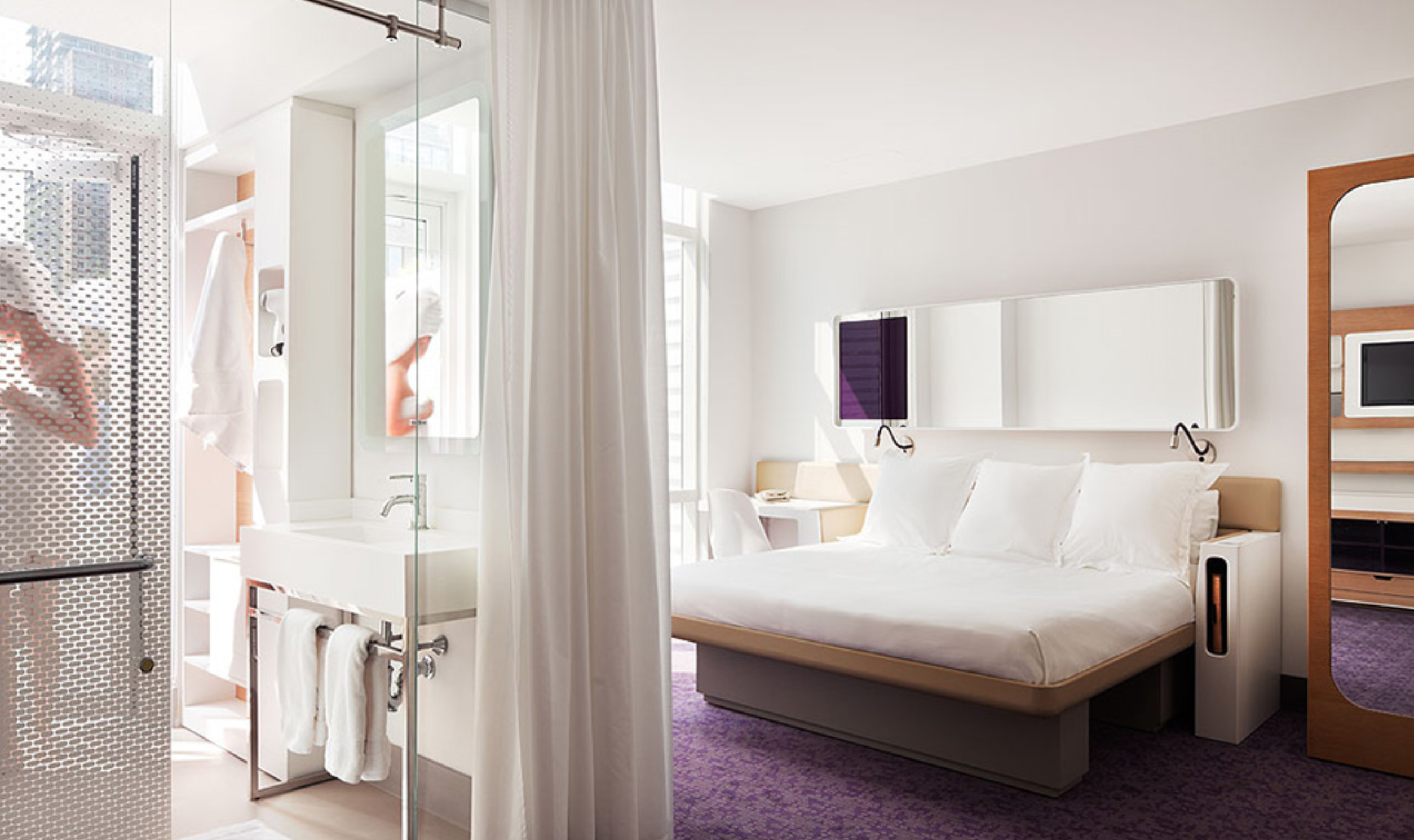 It may seem like the examples chosen in this article suggest that the Microhotel is defined by its escapist characteristics, and whilst this remains partly true, there are several examples of Microhotels that have excelled in urban environments. Yotel for example, is a brand of hotels that has marketed itself as a redefining engine, claiming to offer you “everything you need and nothing you don’t”, which may seem like an exaggeration of the micro idea, but it surprisingly proves a very convenient and low priced alternative to the “typical” hotel. They believe that by removing the unnecessary amenities and accessories that add a clutter, and therefore stress, to the practice of staying in a city centre hotel, they provide the guest with the opportunity to relax better for cheaper.

In expensive times like these it is refreshing to see a trend in minimalism, stretching from the physical to the monetary, evolving into the desirable choice for accommodation. For marketers it may be quite important to recognize this change in preference and utilize it to their advantage. Simplicity can extend far beyond the bounds of the tangible. Could it be that simple minimalist ad campaigns are the marketing trend of the future? All we can say for sure now is that these properties are just a few examples of hotels that are paving the way for this exciting modern take on space and its functionality, proving most certainly that bigger perhaps isn’t always better. 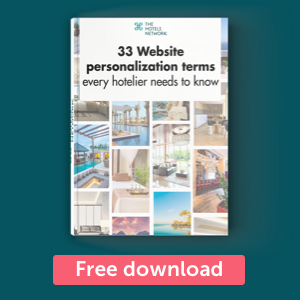 Get Your Board Game On! Monopoly Hotel Is Now a Reality!